Click on the map to explore the world of the Vikings! 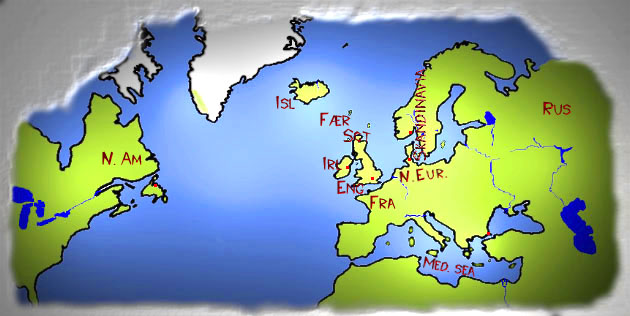 The world is flat!

This was something probably all Europeans took for granted at the time, the Vikings included. While most people in Europe, however, seldom ventured more than a few kilometres from the village where they were born, the Vikings were intrepid travelers. Even if they did not know what the world as a whole was really like, they were prepared to go off and explore it.

“The orb of the world, which mankind inhabits, is riveted by many fjords, so that great seas run into the land from the Outer Ocean. Thus, it is known that a great sea goes in through NORVASUND (Straits of Gibraltar) all the way to the land of Jerusalem. From that same sea a long bight stretches towards the north-east, called the Black Sea, which divides the three continents of the earth: to the east lies Asia, to the west lies Europe, but to the north of the Black Sea Greater Sweden or Sweden the Cold (Russia)

Through Greater Sweden (Russia) from the range of mountains that lie to the north beyond the edge of human habitation, there runs a river properly called the Tanais (Don), which flows into the Black Sea. In Asia to the east of the TANAIS there was a land called Asaland or Asaheim (land of the Æsir); its chief city was called Asgard (Home of the Æsir). The city was ruled by a chieftain called Odin and it was a great centre for sacrifices…”

To sacrifice a valuable animal (blota) to the gods put them in a good mood. To worship the gods was an important part of Viking life. Christianity changed the Vikings’ religion, but many of the old customs continued unchanged for hundreds of years.

To the Vikings The Law had always been the same right from the beginning of time. The Law represented the balance between good and evil and had to be upheld. An imbalance could mean disaster. A crime created an unbalance and had to be corrected by making the lawbreaker pay or be put outside the law. Changes in society made changes to the laws necessary, but were regarded as adjustments to keep up the balance in the eternal Law.