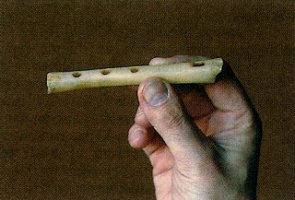 Replica of a recorder, made from shin bone of a sheep. The original instrument from the early part of the 13th century, was found during excavations in Århus, Denmark, but this type of recorder is also known from other excavations from earlier periods.

The lur from the Oseberg find is just a small fraction of items found in a burial mound richly equipped for a Norwegian princess at her burial in AD 834 according to C14 dating. The cone-shaped wind instrument was found in a box made of oak wood, richly decorated with iron ornaments, along with other items. The photo shows a modern Swedish folk-instrument of the same kind with birch bark wrapped around it. The original lur appears to have been held together by willow. 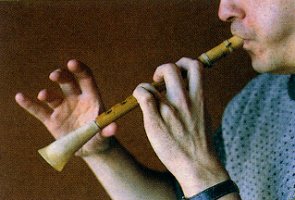 A part of an instrument was found during the excavations of a shipyard at Fribrødre river on Falster, Denmark. It might have been part of a bagpipe, but there is no evidence to support this theory. On the replica a wooden mouthpiece was added, making the instrument into a hornpipe (a kind of oboe).

The find was from the later part of the 11thcentury. 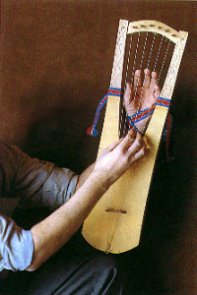 The lyre is a string instrument  similar in appearance to a small harp. It came in many different versions. Read more about the lyre family of music instruments at Wikipedia. 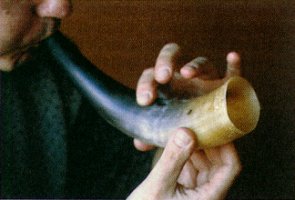 Replica of a horn from Västerby in Sweden. It is made from horn of cattle and has four finger holes. Similar instruments have been in use  until recently in Scandinavia. The original horn is now in Dalarnas museum, Falun, Sweden.

On the Bayeux tapestry one can see a horn blower, apparently sounding the signal to ‘come and eat’. The tapestry was made around 1070, shortly after William of Normandy had landed and conquered England.

Replica of a pan flute from the 10th century found during the Jorvik excavations in Coppergate in York, England.

Each of the tones bored out as holes in the wood, gives a fixed pitch, not possible for the musician to change, only to bend it slightly. The original is made from boxwood, the replica from wood from a cherry tree.

This post is also available in: Norwegian Bokmål Danish