Weather vanes were found on every ship. They showed the wind direction so the coxswain paid close attention to which direction it pointed after they lost sight of land. But it was easy to be fooled. The wind could change direction and the current could send the ship off course. It was therefore necessary for the skipper to have navigation instruments. 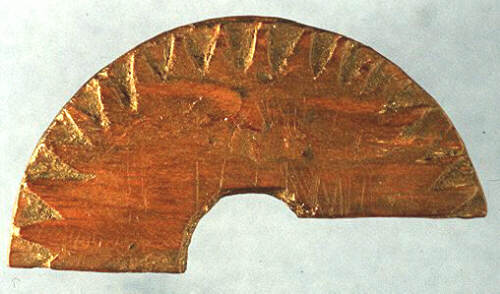 The Vikings had knowledge of a primitive bearing circle. It was based on information about the sun’s position at sunrise and sunset. You could find the latitude with the help of a shadow from the vertical pin and the course was marked by the pointer on the platform. A primitive bearing circle was found on Østerbygda in Greenland, but it is uncertain if this was the same type of bearing circle in use at a later time.

The Vikings used the so-called sun stone in order to find the sun on overcast days. The stone was made of the mineral cordierite, a mineral that could show the direction of the sun on cloudy days. The sun stone could only be used when one could see a hint of blue sky.

In the middle of the day the course was corrected with the help of the sunboard. This was an instrument used to measure the height of the sun. If the angle of the sun had gotten much bigger the ship had kept a too southerly course, less of an angle and it had sailed too far north. In cloudy weather or in a fog it was therefore difficult to navigate. Making a course change on the open sea could be risky. Just a small change could result in not coming to the planned destination. Ottar from Hålogaland in telling about his voyage to the White Sea about 880 said that when he made a course change it was with land in sight not on the open sea.

Seafarers made many observations of the sun all year round and they knew the sun’s path through the heavens for all the seasons. There is a table that was written in Iceland. The table gives the height of the sun for the whole year along with a rundown of sunrises and sunsets. Here you can find where on the horizon the sun goes down and comes up the whole year. All the measurements from this table were put on the so-called semi-wheel. It was then not difficult to find the four directions nor calculate the latitude. It was perfectly natural that guides for seafarers were produced even though the sagas tell us nothing about this.

They often had to find their way back to previously discovered sights by mere chance, places like Iceland and America.

The last resort – a flea?

We have to figure that the Vikings went off-course quite often either because of storms or fog. If it was impossible to see the sun during the day or the stars at night one had to resort to other options. Fleas followed people both at sea and on land. If you went off-course you could pluck a flea from your hair or another body part and put it on the tiller. Fleas always hop or crawl north so you would know the direction and could correct your course.